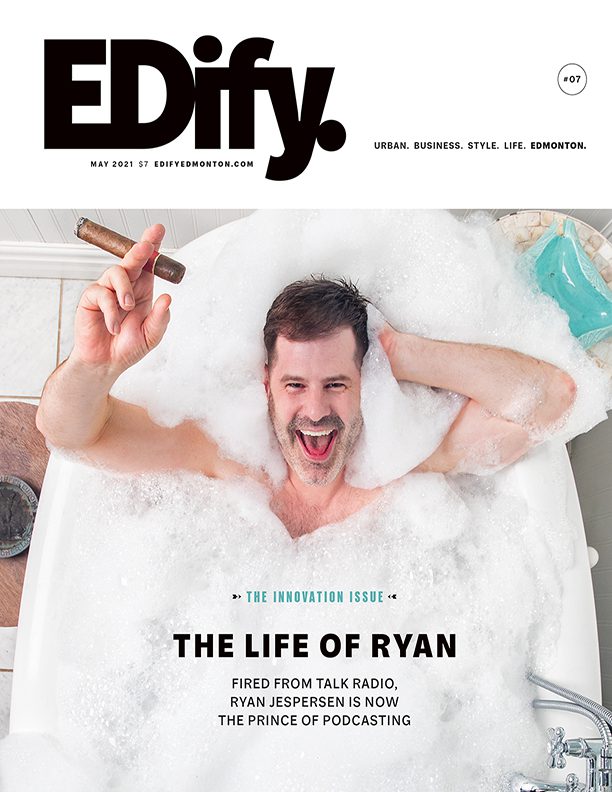 When Avenue Edmonton rebranded to Edify last year, publisher Trudy Callaghan heard someone say she must be either brave or insane to make that move during a pandemic.

She sees it a third way: insanely brave. “We really believe in what we do, we love our city and we just want to keep doing the kind of work that we do.”

The lifestyle magazine went by Avenue Edmonton since September 2006, in a partnership between Odvod Media and RedPoint Media, the publisher of Avenue Calgary.

“When the pandemic hit, we chatted about what that was going to mean because it was pretty clear that we were both needing to focus on our own cities and figure it out for ourselves,” says Callaghan. “It was challenging, to say the least–the pandemic part, the staying in business part, the continuing to publish part.”

A deal in May 2020 saw Odvod Media move forward as the only shareholder in the Edmonton magazine, and so Avenue Edmonton needed to rebrand. Summer 2020 was their last issue.

Though it was a necessity, Callaghan says her team was also excited for the change.

“It afforded us an opportunity to really think about what brand would truly help us represent our city.”

It took a while to find a good fit. Some brainstormed names were “silly and generic,” while iterations of YEG seemed overused.

Then they landed on edify, a verb meaning to build, to establish or to instruct in an uplifting way. The etymology felt exactly right.

Edify launched in print in October. Now six issues in, “it’s starting to feel like a really comfortable coat that we put on, and we’re really enjoying wearing it.”

Callaghan’s team introduced a business section to the magazine and has added more coverage of the arts. She says the voice of the magazine has changed, though the editorial team is the same, to an “authentic Edmonton voice” from local writers. They want to publish longer, more serious features, like Omar Mouallem’s January 8, 2020 that appeared in their first edition.

The changes have been well received. Callaghan says the magazine has been getting more feedback, and the 35,000 copies around the city are still being snatched up.

Their audience has also shifted. Though Edify is still aimed at the average Edmonton resident, “the feedback we’re getting is that it’s skewing a little younger, a little hipper,” says Callaghan. “We wanted it to be modern. It’s an opportunity to be fresh.”

Rebranding the magazine to something fresh in the middle of a pandemic, the name reflects their work.

“We think that in Edmonton, we are makers. We’re builders. We can make anything here.”

Seventeen, when I was a teenager. I actually published my first magazine in grade 3. My teacher printed it on a Gestetner.

The creativity of the people I get to work with. They’re really smart. When I see what Kim Larson, our creative director, does I’m sometimes astounded at how beautiful the pages are. Steven Sandor, our editor-in-chief, has a brilliant mind. They’re really the heart of the magazine and I just love being around them and watching what they do. And of course the rest of the staff–it takes a whole team of people to have a successful business in publishing.

Right now, it’s challenging. But I love what some other publishers are doing and I’m an avid follower of all the ups and downs and the rewards and some of the beautiful things that they’re publishing. I always think about when television got invented and there were some predictions that radio would go away. Of course we all know now that it didn’t, but it had to kind of reinvent itself or become really good at what it was and not try to be something it wasn’t. I think that will be true of magazines. There will be a lot more digital magazines, but I think the print magazine industry will never go away.

There’s different people for all different things. So many people have so many gems to contribute, I don’t know if I could come up with a single name.

Having a Top 40 in November that’s in-person. We pivoted last year, realizing we were not going to be able to gather, and we did a video. It was fun, it was expensive and it was challenging, but we did it. The result was really good, but I think for me I have my heart set on having a Top 40 event in person again.