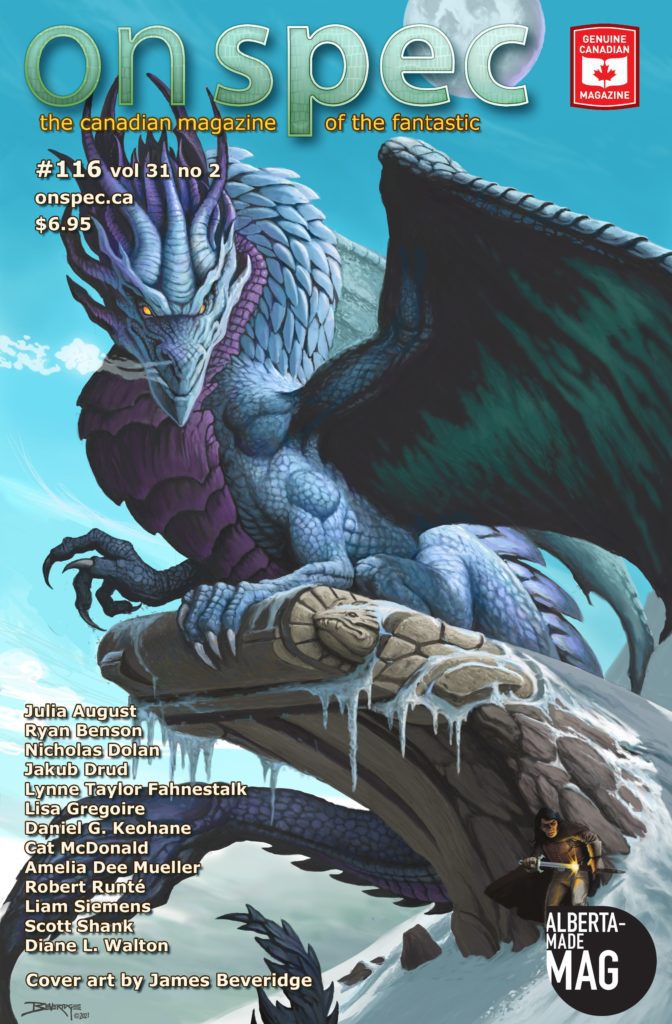 Diane Walton has worked with On Spec since it began publishing over 30 years ago. The managing editor says she’s read a lot of forgettable, mediocre short stories that are submitted to the magazine, but there are others, well-crafted and inventive, that stand out. She can still recall the final line, word-for-word, to one particularly heart-wrenching story she read years ago.

“There are some stories that’ll just stay with you forever and that’s the power of it,” she says.

On Spec, which publishes four times a year, is a place for the thought-provoking, the addictively entertaining and anything in between. “The Canadian Magazine of the Fantastic,” as it’s tagged, is a literary publication that specializes in science fiction.

Labelling it as such comes with challenges, says Walton: “People have a very tunnel vision view, from the outside, of what [science fiction] is, and yet there’s so many things that we can do.”

Fantastic literature includes everything from magic realism and horror, to adventures in outer space. It’s a specialized genre that, in reality, is broad in terms of what writers can explore.

“An author that writes a science fiction short story can take more of a risk with what they’re saying,” says Walton.

Having worked with On Spec for three decades, she’s seen how the genre has changed. When the magazine began, there was no Canadian market, outside of Quebec, that published short science fiction and paid contributors. Now, these kinds of publications have proliferated.

“I think the appetite for fantastic literature has changed,” says Walton.

Part of that, she speculates, is due to the popularization of movies like those in the Marvel Cinematic Universe. Other movies, like Arrival, are based on famous science fiction short stories whose impact is so great that they make it to the big screen.

Those movies help, says Walton, though their fans aren’t necessarily readers of science fiction as well.

Nevertheless, On Spec has grown its audience primarily by word-of-mouth and by attending writing conventions and science fiction and fantasy conventions like Worldcon. This past year, those events have largely been virtual because of COVID-19, which has proved a challenge for On Spec, but the magazine is persisting.

“We have a steady, very loyal following,” says Walton. “We’ve got people who have subscribed since 1989, when we started.”

The appeal of On Spec, whether someone is a new reader or a long time subscriber, is simple.

“We’re just in this business for good stories,” says Walton. “They’re useful. You can say a lot in a short story and make a point, and quite often it’s a point that somebody remembers.”

It wasn’t science fiction! It was my birthday recently and my daughter bought me a copy of this book called Feminist Acts, published by the University of Alberta Press, and it’s about Branching Out, which was a feminist magazine from 1973-1980. I was a volunteer on that magazine. That was the first magazine that was a labour of love for me.

As far as reading, probably the big magazines in the States like Fantasy and Science Fiction and Analog Magazine, but I wasn’t totally committed. I just enjoyed reading the short stories.

The variety and the friends that I’m making. At one convention in Ottawa, I was in a panel about the history of On Spec and at the end of the panel when people were leaving I said, “I’d really like to see a show of hands here. How many of you in this audience have had a story in On Spec?” At least 20 people put their hands up and I knew every single one of them. That’s the best part, is that we, as much as possible, love to get to know our writers.

Candas Jane Dorsey, who lives in Edmonton, is an absolutely fabulous fabulist. She writes amazing science fiction and fantasy and now she’s branched out into murder mysteries, which is really cool. She’s quirky and her writing is awesome.

I’m looking forward to some changes in my own life. My husband and I are selling our house in Alberta and moving to Nova Scotia, but On Spec will come with me virtually because if I can do this from my home here on a computer I can do it from just about anywhere on a computer.