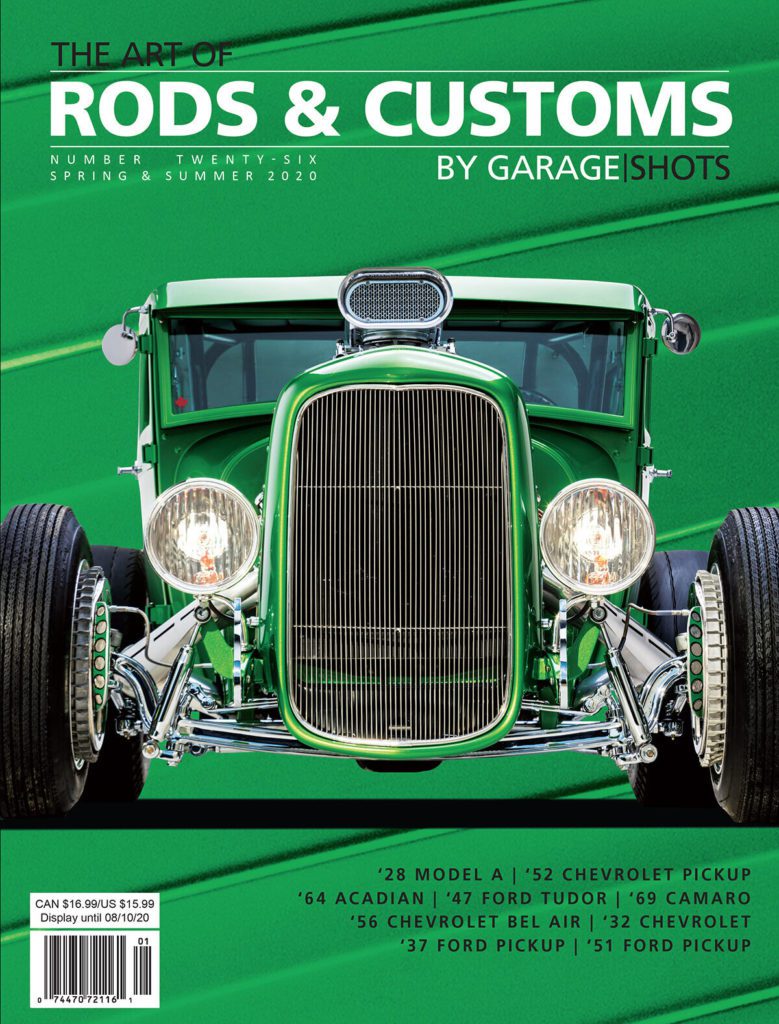 In December 2019, American company TEN Publishing announced that it was discontinuing 19 of its 22 automotive magazines, and the time seemed right for Darren Greenwood.

The publisher and photographer of the Edmonton-based GarageShots Magazine had wanted to expand to the U.S. market for several years, and space was suddenly open.

“A lot of the distributors down there were scrambling to fill their automotive shelf space and so that’s when we were going to launch, to try to fill some of that void,” says Greenwood.

When the pandemic hit, he couldn’t take that risk. But this spring, as most of the U.S. is opening up, it’s a better time. GarageShots will be stocked at Barnes & Noble and Books-A-Million stores across the country. The magazine is published twice a year and showcases the art and beauty of hot rods, street rods and custom vehicles.

“It’s a big gamble, but to get the magazine to where I would like to see it, I have to break into that market, just considering the size difference between Canada and the U.S.,” Greenwood says.

A commercial photographer by trade, he has worked on GarageShots on the side since the spring of 2012, but he wants that to change.

“I’d like to see the magazine grow where I can just concentrate on the growth and development of the magazine,” he says.

It’s a different kind of work than commercial photography, where, for example, he’ll be hired by a company to shoot portraits of employees.

“Half those people don’t want me there taking their photo,” says Greenwood. “It feels like a job, it feels like work, whereas shooting all these hot rods, because everybody’s so passionate [about their vehicles] it’s just a joy to work with everyone.”

For the last six years, GarageShots has been a part of The SEMA Show, a large, week-long automotive trade show in Las Vegas, Nevada. There, it was received well by potential U.S. advertisers and other people in the automotive industry.

“Everybody we met [was] just so impressed with our magazine,” says Greenwood, “so that’s really encouraging now that we’re getting into the newsstands down there and now we’re hoping that the average reader also appreciates that and picks up our magazine.”

With a soft touch cover and heavy paper, the magazine feels more like a coffee table book, and it’s supposed to be something readers keep or collect. The art sets it apart from other hot rod magazines, says Greenwood, which often start from a car building background and focus on the technical or how-to side of things.

“I’m coming from a photography background so I’m truly more concerned about turning the car into a piece of art and reflecting that,” he says. “We really strive to put our photography head and shoulders above everything else that’s out there.”

Cracked and MAD Magazine. The art was different, and as a young boy it seemed ridiculously funny, what they were presenting and the way they presented it.

It’s given me an opportunity to travel across Canada and the U.S. and meet a ton of people that are passionate about their hobbies and what they do. It’s just been a lot of fun travelling across the country to various car shows and shoots and meeting people who get to talk to me about what they love.

There’s the potential to do what you’re passionate about and the potential for growth. I’m kind of set a little differently because I’m based in Alberta but we’re all across Canada as well, so I’m not just focused on one province.

So many of the high-end car builders across Canada and the U.S., I’m so impressed with what they can envision and what they can build with their hands, creating a totally custom vehicle. It always inspires me to try to push my photography to reflect the quality of what they’re creating.

It’s definitely the potential that moving into the U.S. market might give us. We’re taking kind of small steps in how many copies are heading down there, but it was a big jump from what we have now. The potential for growth going into the U.S. market over the next year or two years is huge so we really looking forward to seeing what happens there.