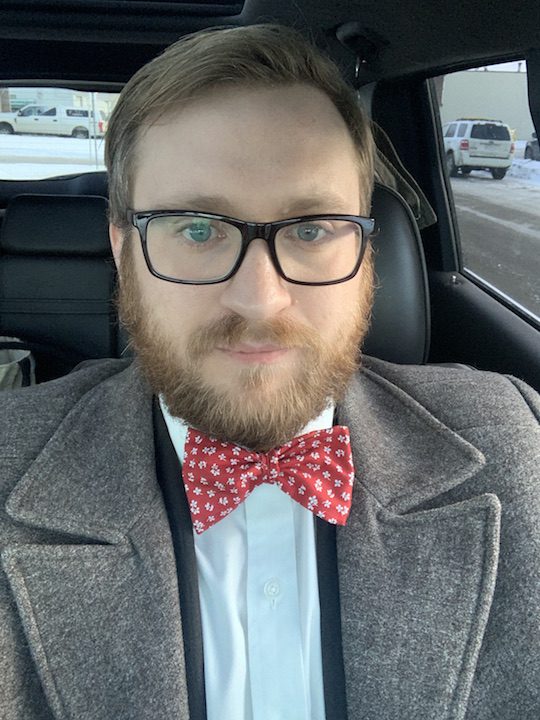 There’s few voices in Alberta like mine. There are those from the ivory tower, or downtown. And there are voices from the conservative rural areas or business.

I am both, and yet neither.

I grew up on a farm near Ashmont, a tiny hamlet about two hours northeast of Edmonton, along Highway 28. Ashmont school is small. There were 25 in my graduating class.

I have a history degree from Grant MacEwan in Edmonton. I’m the first in my family to get a university degree. I followed that up with a Masters Degree in Strategic Studies from the University of Calgary Centre for Military and Strategic Studies. It’s the only civilian program like it, and combines military history, international relations, political science, anthropology, and sociology.

Armed with two degrees, I went to Toronto on a co-op term to work as a Threat Intelligence Analyst for a Big 5 Financial Institution – right on King and Bay. I investigated bank robberies, monitored protesters, and provided geopolitical analysis for investing. But I really didn’t like all that concrete.

So I came back, and ended up in Calgary. Still surrounded by concrete, but at least I was close to home for a weekend escape as needed. I started to work at the Canadian Global Affairs Institute.

But an economic downturn in Calgary, and anxiety that I still had something to prove made me look east again. I ended up in Ottawa at a defence consulting firm, working with the retired versions of some of Canada’s highest-ranking soldiers, sailors, and airmen.

Just before I left for Ottawa I got involved in politics. After the Progressive Conservatives lost it all in 2015, I wanted to get involved in the rebuild. So I went to a Constituency Association meeting, and ended up VP Communications. I stayed in the know during the subsequent leadership election (being one of the few to back Dr. Richard Starke), but had moved to Ottawa in the fall of 2016.

I took a sabbatical while working in Ottawa to run Stephen Mandel’s tour when he ran for leader of the Alberta Party. Lines were being drawn in conservative Alberta, and I chose the more moderate, compassionate side. Travelling to every corner of the province on that campaign reignited my love for the beauty of the land and people of this great province. I made a vow to end my dalliance with Ottawa soon and move back.

I did just that in the fall of 2018. I came back without a plan to work, but I had published a few journalistic pieces while in Ottawa, and figured I could make a go of it as a writer. And I did manage to pay the bills through my writing. But once again politics interfered. I moved to Edmonton to run two Alberta Party campaigns. We lost, but the Party was part of the conversation, and 172,000 Albertans voted for us.

Since the election I’ve been working as a public affairs consultant, and continue to work with the Alberta Party as their Chief Strategist. My role as strategist is all about being incredibly objective about the politics in the province. This includes not only determining how my party of choice can take advantage, but how all parties will work to do so within their ideological parameters. Because of this, I can ensure that my analysis is objective and non-partisan.