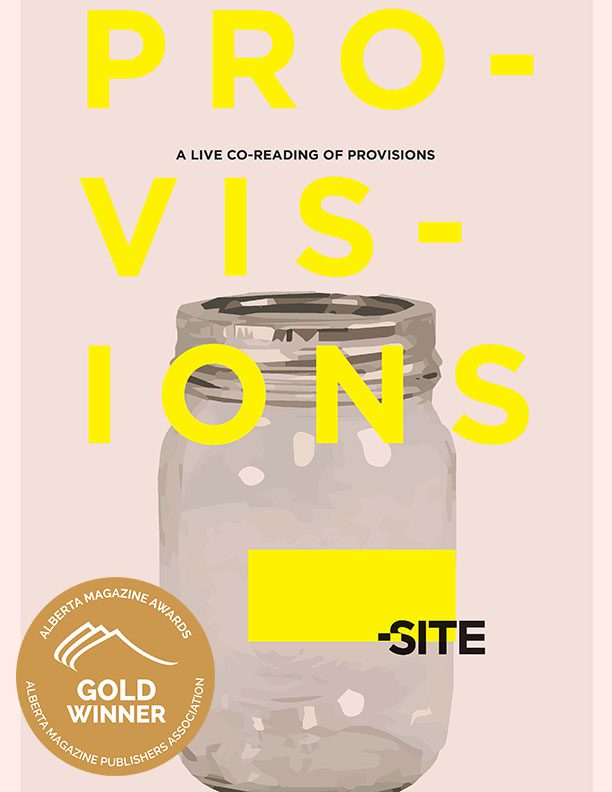 Member Spotlight: The Site Magazine is growing into its voice

Founded in 2015, The Site Magazine is young, but the consideration that goes into each bi-annual volume has made it stand out as a small independent and international publication in just a few short years.

The small team of architects, designers, and academics created the magazine to investigate thematic issues through the lens of the built environment. They hit the ground running with their inaugural issue Borders, which won the Magazines Grands Prix for art direction at Magazines Canada’s annual awards ceremony. In the past 6 years, with 6 volumes, 4 pamphlets, 1 zine, 50 online features and four more National Magazine awards under their belt, The Site Magazine has come a long way.

Despite planning their issues up to two years in advance, the team behind The Site Magazine has been able to anticipate relevant themes. In 2017, they published Feminisms, which landed on shelves just after the Women’s march on Washington and the #metoo movement was taking off.

Their upcoming issue, called Healed Outcomes, was planned almost two years ago. Considering the pandemic and social upheaval over the past year, its messages are more relevant than ever. According to Chief Editors Miriam Ho, Ruth Jones, and Aisling O’Carroll: Healed Outcomes marks a pivot in The Site Magazine’s trajectory. It is the first of a five-issue series that will tackle pressing and urgent social questions and confront how design can contribute to improving the world for everyone.

What remains consistent is The Site Magazine’s unwavering commitment to celebrating Canadian design and research. Each issue celebrates the voice of each and every contributor and their work is curated very intentionally so that it can connect with a broad audience,” Creative Director Carey van der Zalm. “ We are very proud of the platform we have created because the design community around us tells us they are stronger with us.”

The Site Magazine prints a limited run of each issue (approximately 750 – 1000 copies) in Edmonton. But, they have stockists across North America, Europe, Japan, Australia and India. Although the editorial team is truly global, sitting in Toronto, London, Berlin, Zurich, Bangalore, and Melbourne, Creative Director Carey van der Zalm is an Edmonton native. AMPA talked with Carey about her thoughts on the publishing in Alberta and her sources of inspiration.

I remember loving glossy magazines as a young woman. I really appreciated magazines as a medium because I could control my own consumption over these extravagant images and incredible graphic design – something digital media doesn’t always allowed for.
But in terms of content, I was obsessed with the Japanese A+U magazine as a young architect. I spent time studying in Tokyo, so I came to adore the Japanese aesthetic.

What is your favourite thing about working in publishing?

As creative director I am tasked with the final step of putting each issue together. The publishers are focused on our long-term growth and set our agenda, then the editors source and perfect the content. But, I bring the issue to life. So, I really appreciate that I can focus on all the details and ensure that every piece makes an impact. It’s a very special when I watch our contributors see their work packaged in a way they never imagined or our readers voraciously consume the pages I have designed.

Alberta, especially Edmonton has such a thriving and intimate creative scene. What is amazing about working in publishing here is that it’s so easy to find overlaps with other creatives and get new, exciting projects off the ground. For example, for our Feminisms issue I worked with Sean Trayner, an Edmonton-based photographer, and several performance artists to create the entire visual identity for the issue, which also won a National Magazine Award in Art Direction.

In our most recent issue Healed Outcomes, I had the pleasure of interviewing Architect Juhani Pallasmaa. He introduced me to the topics of phenomenology and spirituality in architecture. So, both in design and writing he is someone I regularly reference and continue to look up to.

At this very moment, I am so excited for people to absorb the issue that we have just released. I think Healed Outcomes will resonate with readers across the country and around the world.

But, beyond that, I am looking forward to the new collaborations that we are working on with contributors, retailers, and other platforms. Our publishing hiatus during lockdown reminded us that we can contribute something really meaningful to people’s lives, whether they are writing something new for our pages or reading something they had never thought about before. But what’s important is that we focus on engaging one another and learning together, whether that learning be focused on collective healing, environmental action, or anything else.