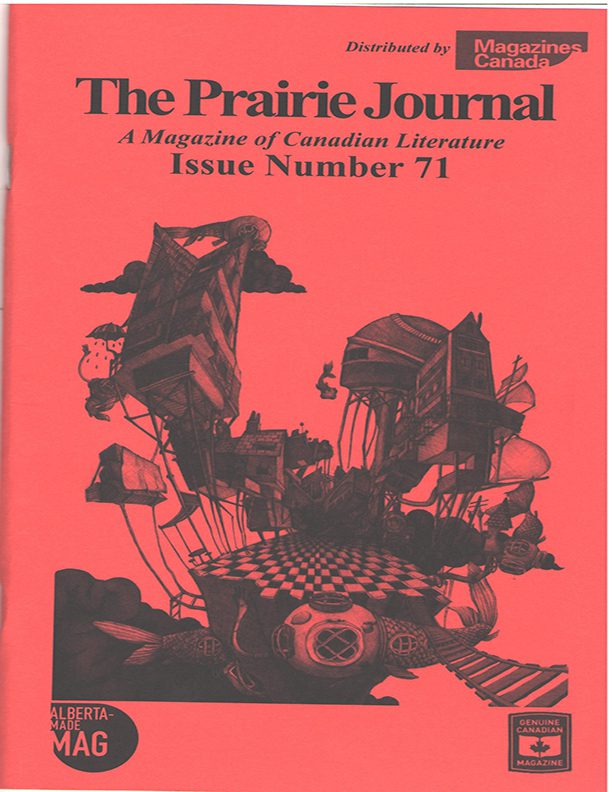 In 1983, Anne Burke was pregnant with her son and looking for new challenges.

“At the time, not very much was thought about women and what we were capable of doing,” says Burke. “It was either you work or you stay home, you don’t do both.”

An ambition to prove that wrong prompted her to start The Prairie Journal of Canadian Literature, a magazine that has endured despite starting “against all odds.” When The Prairie Journal began, Dandelion Magazine was the dominant literary publication in Alberta, and people had the idea that there wasn’t a need for another, says Burke. She disagreed.

“We want as many as you can have,” she says. “If you think in terms of being a writer, you want to have more outlets, more opportunities. And you’re building the culture, the literary history. I was really aware of being a part of that.”

The Prairie Journal has published two issues a year since its inception. It prints a variety of writing including fiction, poetry, plays, interviews and reviews. More recently, publishing online has freed the magazine from certain constraints, as Burke notes that they can now share longer pieces of work.

She says that the changing landscape of Alberta magazines has made the past 38 years an interesting ride. The Prairie Journal was a co-founder of the Alberta Magazine Publishers Association in 1997, which started with a list of “maybe a dozen” magazines and has since grown to more than 50 members.

“In some terms, people look at national publishing as being in Ontario because that’s central Canada, so it took a while to have people respect what we did here in Alberta,” says Burke. “The idea of the region wasn’t supposed to be at the same level as the national and I think we’ve certainly proved that wrong.”

Even so, the idea of the region has been integral to The Prairie Journal, which focuses on a prairie perspective toward Canadian literature. That point of view can manifest in a variety of ways, says Burke, whether that’s in the description of the physical landscape or the identity of the speakers in a piece. For example, she says that in her own poetry, she gravitated to writing longer and longer lines because of the huge expanse of space in the prairies.

The prairie perspective is “the inner core of it, but it goes in all different directions. We just see things differently than elsewhere,” says Burke.

The Prairie Journal focuses on writing and has positioned itself over the years to publish work from emerging writers, but it also supports other pursuits. For example, all artwork in the magazine is original, which Burke says is an opportunity to display how much talent there is in Alberta.

Every fall, The Prairie Journal publishes an issue with the theme of the Alberta muse as a way to celebrate the culture in the province.

“That really sets off our publishing in a positive way and it has to do with being part of the community,” says Burke. “I think everybody in Alberta has that sense that you’re part of something larger.”

The political and literary journal Edge. I came across it when I was a Canadian literature student. It was published from 1963-1969 and what I could compare it with is probably Jackie Flanagan’s Alberta Views, but this is back in the 60s. Edge had this satirical bent, where it had literature, but it also did social commentary. It was during the Social Credit government, so this was the magazine that was critical and put everything “on edge.” It was a little magazine that actually got denounced in the legislature. That was really something that I got intrigued by – the relationship between social or current events, and then this small literary press that’s doing something that needs to be listened to. It was small but it was so effective. So that’s what sort of drew me to doing my own magazine.

I really enjoy the give and take, because I’m a writer and an editor myself. When I’m reading good work that people have submitted, it really keeps me energized. And then I’ve also come to know more about the industry. A lot of us were on our own, but then were brought together in community through AMPA or Magazines Canada, so you really learn from others how they manage their craft, and you try and be better at your own.

It’s grown. In Alberta, to be successful, you need perseverance and sometimes you need luck to help you succeed. So the pandemic could be a crossroads, but I really do see the magazine industry coming through this. During the pandemic, our readership went way up, so there’s something that we do that’s really essential to people and we should continue doing it.

Henry Beissel, who edited Edge, was really an innovator at the time he was doing that. But there’s so many now that it’s really hard to name one person.

All of the new work that we’ll be able to share with our readership. It’s good to continue doing it and still remain inspired by the work that’s produced. And I’m looking forward to celebrating those authors who have achieved awards and taking time to really feel the difference that they’re making.