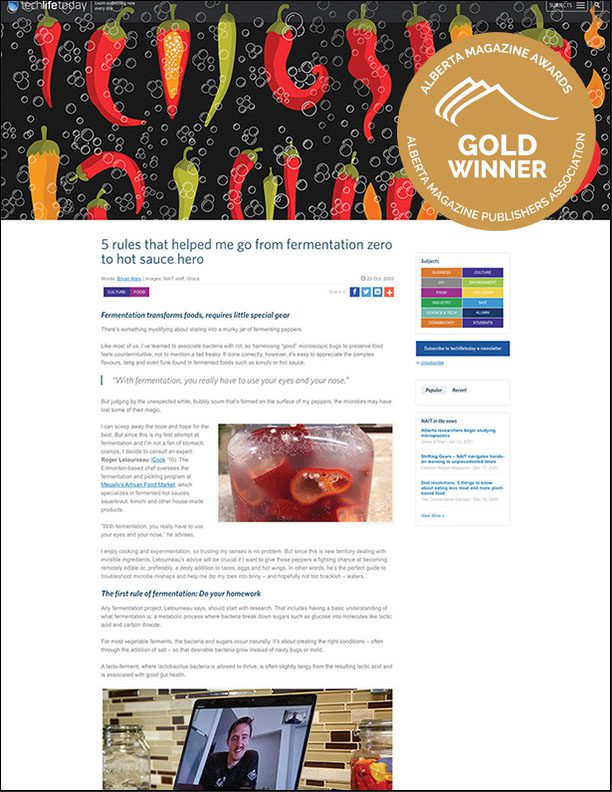 It’s a small team behind techlifetoday, the magazine out of the Northern Alberta Institute of Technology (NAIT). Most of the content is produced in-house by four people, and only one – senior communications specialist Scott Messenger – works full time on the magazine. But the set up works; techlifetoday is a finalist for four 2021 Alberta Magazine Awards.

“Considering the size of our little operation, it’s extra gratifying that we can still produce content that is strong,” says Bryan Alary, the team lead of external communications at NAIT.

An online only magazine since 2019, techlifetoday’s workflow was “fairly uninterrupted” by the pandemic, with one notable exception: story meetings. Alary says that brainstorming ideas in a virtual setting is much more challenging than in person. They’ve made it work, though, producing articles that both highlight the talent of NAIT alumni and are of interest more broadly for people in Edmonton.

For example, Michael Hingston’s Inside David Egan’s Plan to Revive Edmonton’s Transit Hotel, a finalist for the Alberta Story Award, showcases the efforts of a NAIT alumnus to save an over 100-year-old landmark. It is also a relevant story for the wider community.

“Edmonton has a reputation of not always honouring its history, perhaps, the way other cities do,” says Alary. “A lot of landmark buildings get torn down rather than renovated or retrofitted or preserved for the next generations.”

With Hingston’s story, “We’re offering the chance to learn a little bit more about the building and why it has been important to the community – and why places like that are important for Edmonton and for our identity as a city.”

Since the pandemic, techlifetoday has leaned more heavily on service journalism, with a variety of stories about food, wellness and mental health and even has one that is a finalist for the Service Journalism Award.

“We’ve always done those kinds of stories, but I think audience needs have changed a little bit during the pandemic,” says Alary.

While techlifetoday’s service journalism has increased, longer feature articles are less common as a result. Photoshoots and video are also less feasible because of COVID-19 restrictions, so Alary says they’ve had to be more creative visually.

The magazine also launched a new podcast, Career Essentials, in January 2021. The monthly episodes cover topics like job search tips in the pandemic and leadership in fighting forest fires. Rather than using NAIT’s on campus recording studio, the podcast is recorded and produced from home.

“We’re trying to make the best content that we can within the confines of the pandemic,” says Alary.

Though the pandemic may be limiting in some ways, there is no shortage of stories to cover.

“There’s a community here at NAIT of very talented individuals and there’s lots of great things happening, not only on campus but all over the province where alumni are living and working.”

techlifetoday is also a finalist for the Digital Project and COVID-19 Story Awards. View all of the Alberta Magazines Awards finalists here.

Scott Messenger: This will probably sound a bit lame, but maybe not. When my brother and I were kids, we were huge wrestling fans – the theatre-as-sport that was then called the World Wrestling Federation. For a little while, they had a monthly magazine, and we’d head down to the mall and hand over our allowance for it at the tobacco shop. The thing that was so great about it, as might be said about any magazine, was the way it opened up a world for us. Profiles! Interviews! News! Gossip! Glossy photos! It pulled back the curtain (without giving away the fact that our favourite “sport” was all gloriously fake) in a way that TV could not, immersing us in the subject. And there would be more next month! So, not a very sophisticated answer to your question, but that WWF magazine still demonstrated the (muscle) power of the medium, and I think it’s what hooked me.

Scott Messenger: I mentioned that idea about immersion, from the perspective of the reader. That applies to the writer as well. I welcome the prospect of being enveloped in a story that I’m working on, inhabiting it without necessarily being part of it. There is always more to be learned than facts from this process, and that strikes me as a privilege, even if the subject matter is difficult.

How would you describe Alberta’s magazine industry in a couple of words?

Scott Messenger: Curtis Gillespie, who is easily one of Alberta’s and Canada’s best magazine writers. Smart, insightful, funny, thorough, wholly entertaining – the guy does it all. Such talent. The biggest thing about Curtis that stands out for me is his innate ability to recognize the full potential of a story, as either writer or editor, and to bring it to the fore. He’s been a friend and mentor of mine for years, and I’m still learning from him.

What are you looking forward to in the next year with techlifetoday?

Scott Messenger: I hope that we can reincorporate more longform work into our lineup, like we used to. The pandemic required a great deal of housekeeping communications for the institute, which our editorial team also contributes to at NAIT. It was absolutely necessary, of course, and no one begrudges it. But this also meant that we had to look to simpler subjects and stories as we worked to continue to produce new, quality content during this time. We find that there continues to be an appetite for longer stories, and our readers are willing to spend time on profiles and issues-based articles that focus on NAIT alumni, students and staff and the amazing things that they do for our province. In addition to the news about NAIT and service content we produce, we need to continue to tell those broader, deeper stories, because they explore and celebrate things that are uniquely Albertan. Perhaps we need that now more than ever. We can’t wait to spend more time on that in the months to come.