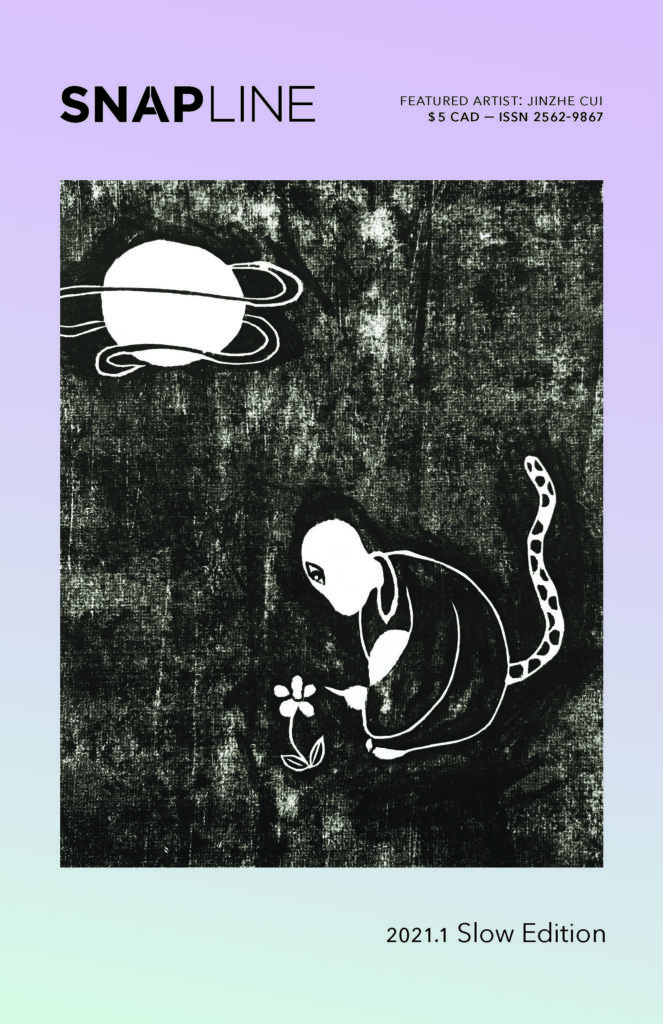 While April Dean, director of the Society of Northern Alberta Print-artists (SNAP), acknowledges that SNAPline is a very niche magazine, she also points out that there’s an appetite for the publication that celebrates printmaking and print culture in Edmonton and beyond.

Printmakers often share resources and work in shared spaces like communal print shops. It’s primarily at those print shops that SNAPline is found. Published three times a year, 500 copies of the magazine are distributed to artist-run centres in Edmonton and across Alberta, as well as print centres elsewhere in Canada, the U.S. and the U.K.

“Our target audiences are probably quite split between being hyperlocal, as we really want SNAPline to be a place where emerging artists, writers and new voices in the Alberta visual arts community can contribute,” says Dean. “But then it’s also for anyone who’s interested in print making and print culture, so it can spread to print centres all over the place and still maintain some relevance.”

The magazine wasn’t always a space for emerging writers and artists to publish their work. SNAP has commissioned artists to create fine art prints since 1989 as part of a mail art subscription service, and so SNAPline was initially a newsletter for the organization to transmit information about the commission.

That changed in 2012 when Dean and a group of volunteers took on the publication as a passion project, one that would eventually have a focused editorial approach, themed issues and paid contributors.

“We were pretty determined to make it a real publication,” she says. “It meant a real commitment – we’re a print organization, so if we’re going to print something, it should look really good – so a commitment to elevated design was part of the conversation, as well as printing in full colour and being an image-focused publication.”

In addition to written work, contributors can pitch visual pieces, such as photo essays or comics. The magazine is an important space for both emerging and established writers and artists across North America because of the specific nature of print-making, explains Dean.

“Any kind of publishing activity about this very niche, special thing we’re interested in I think is really exciting to people.”

Probably Mad magazine when I was very young. Later in life, Canadian Art. I think for me it was a surprising magazine as a young artist, in that the kind of work and art that Canadian Art was publishing in the early 2000s made it seem like art could be easy – which is not true. But there was something about the kind of work that they were focused on at that time, and they’ve kind of shifted dramatically since then, that made a career in art seem like it could be possible and easy.

I think it’s the collaborative aspect with this committee of folks that we get to work with. When that magazine comes back from the printer, it’s like a tangible “we did it!” Before that, everything is just emails and spreadsheets and online meetings and conversations. But when that freshly printed, very beautifully designed magazine comes back from the printer, it’s a real feeling of collaboratively making a thing, which doesn’t happen in the art world that often.

It’s interesting, I think it shows a really big range of interests in our province and it’s probably a bit undervalued or understated. I don’t know if a lot of people in Alberta understand how much publishing happens here.

Christina Battle is an artist and curator who lives in Edmonton and is a really great writer. I’ve read her writing on a whole range of topics and it always feels like her voice, regardless of who she’s writing for or what she’s writing about.

We’re talking about the design of the publication and adding some kind of different design element – an insert or a tearaway or a trifold, something that will pull out, or a poster. So I think over the next year I’m excited about the potential for design intervention.

We really want to start engaging guest editors as another measure to ensure we’re engaging a really broad range of voices and making room and opportunity for emerging art writing voices.