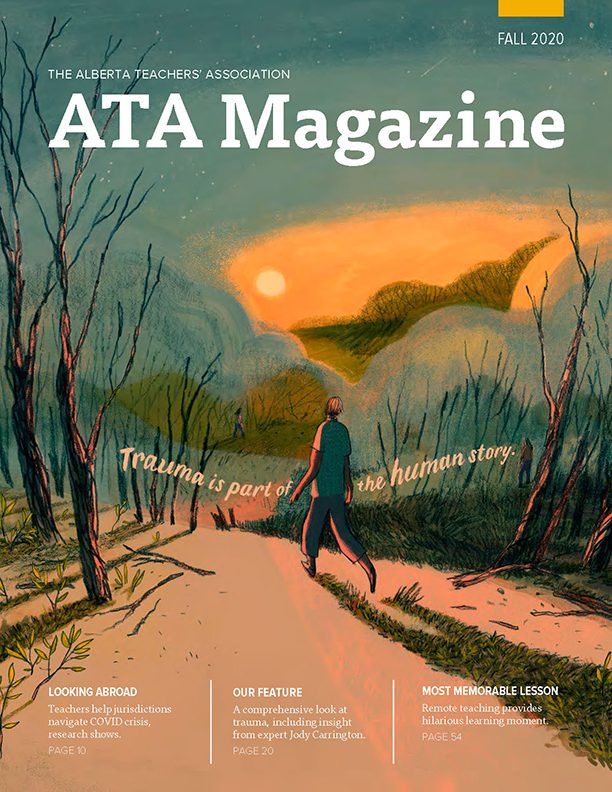 Three years ago, the ATA Magazine felt like an afterthought to managing editor Cory Hare, an add-on to his duties managing the ATA News. Instead of reader responses, each issue of the magazine was met with the sound of crickets.

In the spring 2018 reader survey, a teacher commented that they liked reading it but were teased in the staff room when others saw them.

“It wasn’t really aimed at the average teacher. It was more aimed at a select few who are extremely interested in the academic, theoretical side of education,” says Hare. “There wasn’t really anything in there that related to their day-to-day engagement in their profession, nothing that helped them to be a better teacher or learn different ways of doing things in the classroom.”

Published three times a year, the ATA Magazine had an authoritative, academic tone. There are more than 35,000 elementary and secondary school teachers in Alberta, but it was a niche publication even within that market.

A changeover in the editor-in-chief position and a redesign of the magazine in fall 2018 provided an opportunity to broaden its appeal.

ATA staff worked with consultant Charlene Rooke to help with the redesign. She offered three different “personalities” for what the new iteration of the magazine could be: a journal of ideas, a how-to magazine or a community publication.

“We decided we wanted it to embody all three of those things,” says Hare.

They came up with a mission statement and tone, with words like “engaging,” “professional,” “warm,” and “thought-provoking” to guide what kind of content would be included moving forward.

Before the redesign, Hare says that there were no story meetings. All content was decided by the editor-in-chief, who sourced articles from people in academia.

“We were basically taking whatever they were willing to provide. So whatever form it came in, we did a light edit and it was published,” he says. “Now we’re trying to mold the content such that it adheres to our vision for the magazine […] as opposed to just taking it as is and plopping it into the magazine, just grateful that we have something.”

Though raising standards has resulted in a better product, it’s also made a heavier workload. Before, 6-8 long articles were published in each issue. Now, that number has jumped to 20-30 shorter pieces.

The production has changed as well. Instead of hiring an outside contractor, graphic designers Erin Solano, Kim vanderHelm and Yuet Chan design the magazine in house.

The changes haven’t been without hiccups.

“We’ve had to totally change all our processes and figure it out as we go along,” says Hare. “We’re just now starting to really settle into a routine on that. It’s been quite a journey to get there.”

Four issues in, they’ve heard some positive feedback from teachers, but Hare thinks a lot of members still haven’t noticed the redesign or the magazine’s new digital version.

Looking to the future, he says that a comprehensive marketing and social media plan is needed to ramp up awareness and increase their readership.

I would say Goal Magazine. This dates back to when I was a teenager. It was a hockey magazine produced by the NHL. I must’ve subscribed to it and I would look forward to it and read the articles about different players and stuff like that. And I really liked the pictures, their action shots.

It allows me to exercise my creativity. In journalism, there’s a lot of cranking out routine information because that’s what you feel people need to read or know. There are relatively few opportunities to be creative and actually step back and be proud or entertained by what you’ve produced. The magazine affords me with some of those moments where you can step back. There’s just that satisfaction of doing something creative.

I think it’s a vibrant, kind of underground industry that probably a lot of people aren’t that aware of. It’s a challenging industry. I’m just projecting based on what I hear at AMPA functions because I’m in a situation that’s really sheltered from the actual industry. We’re an organization that has chosen to publish a magazine for its own purposes. It’s not a commercial enterprise. We do look at the numbers and we make decisions based on dollars that go in and dollars that go out, but that’s not the driving force behind our magazine. It exists because the ATA wants it to exist and there’s no appetite to cease operations.

I don’t really have a ready answer on that one. One of the biggest challenges for me is to really take the time to take a step back and see what else is happening out there. My work is a lot of nose to the grindstone with blinders on.

I’m looking forward to continuing to solidify our processes so that producing the magazine is more of a comfortable and joyful experience for me and everybody else because it has been quite stressful. When that’s the case, when you get to the point of publishing it, you feel this relief and you kind of wash your hands of it rather than stepping back and being proud of what you’ve produced. And so I want to get to that feeling of pride upon releasing our magazines, rather than oh, finally, we got through it. Also, we’ve got an ongoing list of feature ideas and some of the ideas on there are quite exciting to me, so I’m looking forward to bringing those to life.