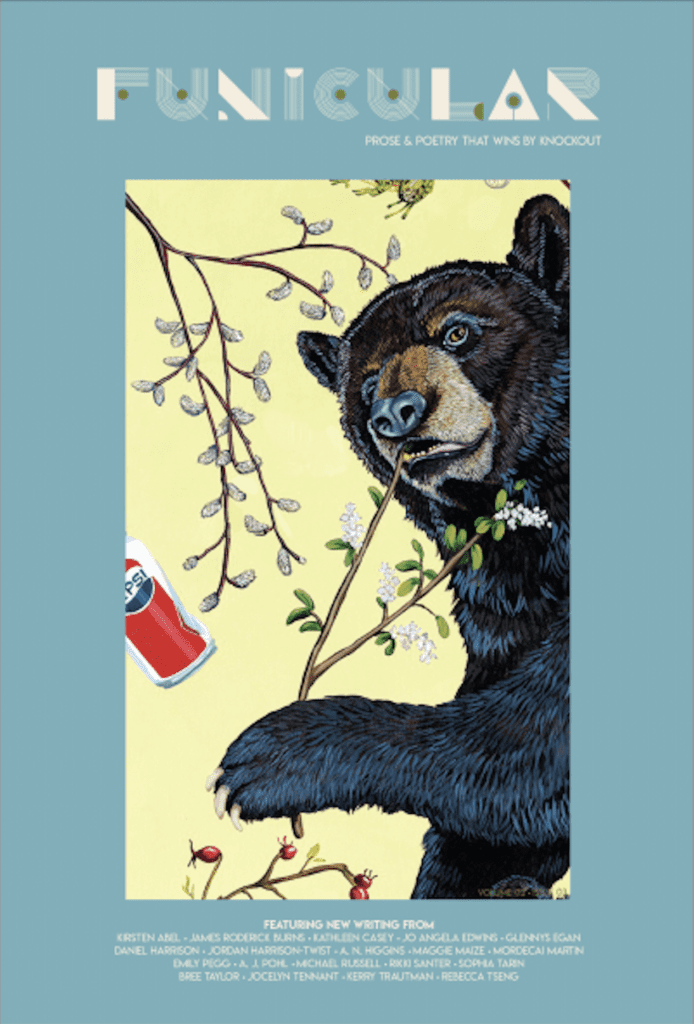 When Jeremy Bibaud and Jason Lee Norman started Funicular, they wanted to read and interact with every piece submitted.

In February 2019, they launched Funicular in print. For the first several issues, calls for submissions to the literary magazine were open for approximately a month, resulting in around 8,000 pieces submitted for each issue. The volume was unsustainable.

“It’s a good problem to have, but we just couldn’t handle it,” says Bibaud.

Now, a small group of volunteer readers help to offset the work and expand the different voices included in the magazine. Funicular usually has two readers for poetry and one or two for fiction who help dig through the mountain of submissions. Even with volunteer readers, it can still be overwhelming, says Norman.

In November 2020, they changed their submission process, hoping to find a way to balance the personal touch of the magazine with getting work done. Funicular’s submission window for each issue is now two weeks.

Though they still receive thousands of submissions, the pace is more reasonable: “It gives Jeremy and I some more breathing room for making decisions,” says Norman.

The abundance of submissions is not unique to Funicular, he says. Management tools like Submittable, which Funicular uses, and Duotrope help funnel writers toward publications and have notifications of approaching deadlines that make it easy for writers to stay organized.

“You could make the submission window 48 hours and a lot of people would probably still find you,” says Norman.

People have taken notice internationally, and Funicular has published work from writers living outside of Canada, for example in India and Nigeria.

“I think because we’ve had that reach, we get a lot of submissions – maybe higher than some magazines,” says Bibaud.

Another factor is the simplicity of Funicular’s guidelines. The editors are flexible when it comes to fonts or spacing: “If I can read it with my eyeballs, that’s good enough. What’s important to me is the story, the writing,” says Bibaud.

Another change decided last November, after a suggestion from a volunteer reader, is that people must include content warnings on their submissions. Funicular doesn’t reject pieces for including certain themes, but they must be flagged.

“You think about a volunteer reader encountering 20-30 stories at a clip, and then just really not knowing what’s coming around the corner,” says Norman. The volunteers read blind: before jumping in, all they see is the title of a piece – and now, content warnings.

“You’re asking people to volunteer their time and their eyes and that includes all their experiences that they bring to the table,” says Bibaud. “If they’re going through the queue and they see one of these things tagged as having something in it that could potentially affect them, they can choose to avoid it. That’s really powerful.”

Past the submission process, Bibaud and Norman are continuing to find ways to make a literary magazine pop. For example, their model for subscriptions, called Funicular Infinite, closer resembles a Netflix subscription – a one-time sign up that continues indefinitely – than a traditional magazine model where a subscription must be renewed each year. They also take care to make the physical product an interesting experience, like using a particular card stock for the magazine’s pages.

“I just love that we’ve managed to take the best of the physical experience and attach it to some of the best practices in the digital world and have this really neat hybrid product,” says Bibaud.

Jason: I used to read and have a subscription to Highlights.

Jeremy: GamePro Magazine was probably the first magazine that I got all in on. I love video games, despite the fact that most of them have terrible stories, but that was the first time I looked at something that was written down and said, “Can I do this as a job? Like I can just write about something that I enjoy?” It’s a weird connection to make and I feel like everyone has that moment at some point where they’re like, “Oh, this is a job.”

Jason: I like the discovery when you find new stuff, something you never expected that makes you exited.

Jeremy: I think because of the blind submission process that we have, we are very fortunate to publish new writers. When you get an email from a new writer who’s never published anything before, it not only reminds you of the first time you got something published, but also you really feel like you’ve given something back and you’ve truly made their day because you know how good that feels. You know that moment when you read that email and you’re showing it to all your friends, the fact that someone else liked what you wrote and they weren’t your teacher or your partner or your friend or your dad or mom. It’s just like some stranger said they liked my work and they want to put it on paper. That’s incredible and so to be able to give that feeling to people, it’s awesome. Every time it happens, it never gets old.

Jason: They have a lot of forethought.

Jeremy: Everyone’s got a really good disposition. We have a friendly rivalry with Glass Buffalo; I think Jason tried to pick a fight with Prairie Fire in Manitoba the other day too. I don’t know if it’s because typically you pursue this thing out of passion versus becoming rich, but everyone’s just really chill and fun to talk to and swap stories with. I had this impression before I got into it that it was very stuffy and pretentious and then when you meet the people involved in these magazines you realize that’s all true. No, not at all – you realize everyone’s just like you. They want to publish a bunch of cool stuff and that was really refreshing to see.

Jason: Metatron Press in Montreal. They publish physically small books and it was started by Ashley Opheim. I’ve never met them or talked to them, I just think they make beautiful stuff with literature.

Jeremy: Popshot. They were the first magazine that made me want to make a magazine. One of the things they always do is commission art for every single piece in their magazine and it’s such a beautiful production by the end of it and so thoughtful. It really feels like there’s a ton of value in this thing that they produce.

Ta-Nehisi Coates is probably one of my favourite writers. I was first introduced to his novel Between the World and Me, but all the stuff he writes for The Atlantic is always just super insightful and raw and smart and beautiful. I’ve always been a big fan of his.

Jason: Having one launch party, maybe? I’m not the most social person, but it’ll be nice to do something in person and celebrate the magazine and see writers again.

Jeremy: We have so many big plans that the pandemic got in the way of. I think this idea of doing really out of the box events or using the magazine in ways that you’re not expecting or finding the magazine in places that you don’t expect to see it, that’s what I’m most excited about because I think people really respond well to being surprised by stories and that’s what we want to do.