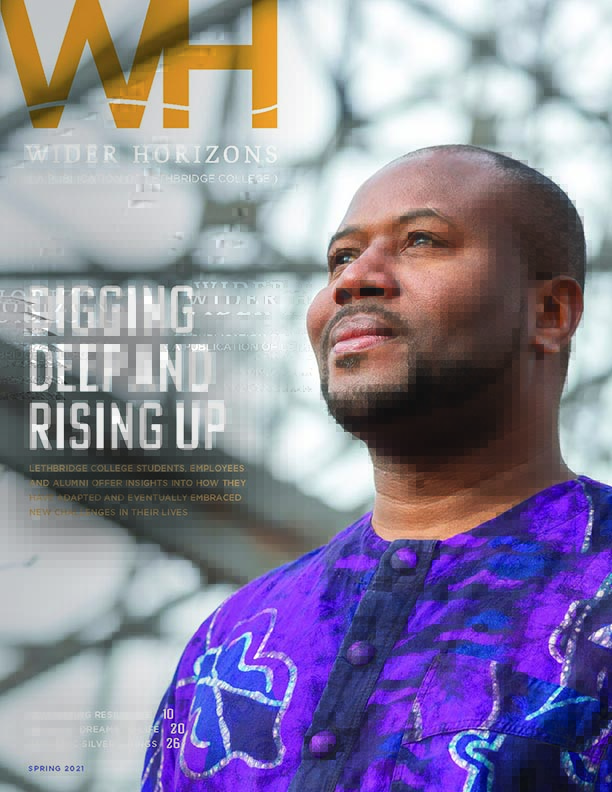 Before working at Lethbridge College, Lisa Kozleski was a reader of the school’s alumni magazine, Wider Horizons. Drawn to its fun, approachable tone and interesting stories, she would pick it up at the grocery store in her community.

Since 2011, Kozleski has been the editor of Wider Horizons, with the goal of maintaining the welcoming tone that originally attracted her to the magazine. Wider Horizons was founded in 2007 as part of Lethbridge College’s 50th anniversary. Published three times a year, it is distributed to about 28,000 alumni and to newsstands around Lethbridge.

Behind the scenes, Kozleski says that there is an encouragement to take risks with the magazine. It’s a work environment she loves because it is the result of trust. For example, her team has the freedom to explore different formats to tell stories. Most recently, they’ve delved more into illustration, as photography opportunities have been limited because of COVID-19 restrictions.

These risks have paid off, as Wider Horizons is a finalist in the Illustration category for the 2021 Alberta Magazine Awards for The Virtual Virtuoso. It’s a feature –told in comic book format – of Mike McCready, an instructor in the college’s virtual and augmented reality technology program.

“We had done illustrations before, but it just sort of was like an epiphany that this is a good solution,” says Kozleski. “I think I pretty quickly embraced that when we looked at what we could shoot.”

As an alumni magazine, Wider Horizons’ content reflects the diversity of Lethbridge College, says Kozleski, where there is a variety of programs from trades to nursing to general studies.

“We have a lot of really cool grads doing amazing things,” she says – like one alumnus who is a polar bear “police officer” in Churchill, M.B.

“I mean, how can you not write about that? There’s no shortage of interesting stories about our people,” she says.

With a background in newspaper journalism, Kozleski also looks to include longer form stories and avoid a “marketing feel” that alumni magazines can sometimes slip into.

For example, in 2019 Wider Horizons published first person stories from Indigenous women with a connection to Lethbridge College, as well as a feature about the opioid crisis in southern Alberta. Not shying away from heavier topics is a defining point of the magazine.

“I’m really proud that we can take those on and share those with our readers,” says Kozleski.

With the freedom to tell a range of stories and explore new ways of telling them, Kozleski says that each edition of Wider Horizons feels, almost without exception, like the best one yet.

“Each issue is thrilling,” she says. “We’re always just looking for new things.”

I used to read Highlights at the doctor’s office, but my brother would have Mad Magazine and I loved that so much. As a teenager, People magazine. Really highbrow, but I think the reason we love magazines now is because of what they were all good at – they tell stories and they appeal to their audiences and they draw you in.

The fact that we get paid money to tell stories and that this is a career. It couldn’t be better.

Inspiring. I take great inspiration from the work colleagues are doing across the province. And it’s really innovative; the quality of stories and images and design that we see is exciting.

Christina Frangou is an amazing writer. I heard her speak at an AMPA conference and she was just mind-blowingly awesome and I now read everything she writes.

Omar Mouallem, as well. His writing is just great and I read everything by him.

We just had a meeting, the designer and I, planning out the fall issue and some stories to come. We have a really, really cool one that we’re looking at for the spring of 2022 and we both just got so excited. There’s always a next issue. It’s satisfying because you complete a project but then it’s done and you get to start something new. I just think the fact that there’s more issues to come is exciting.