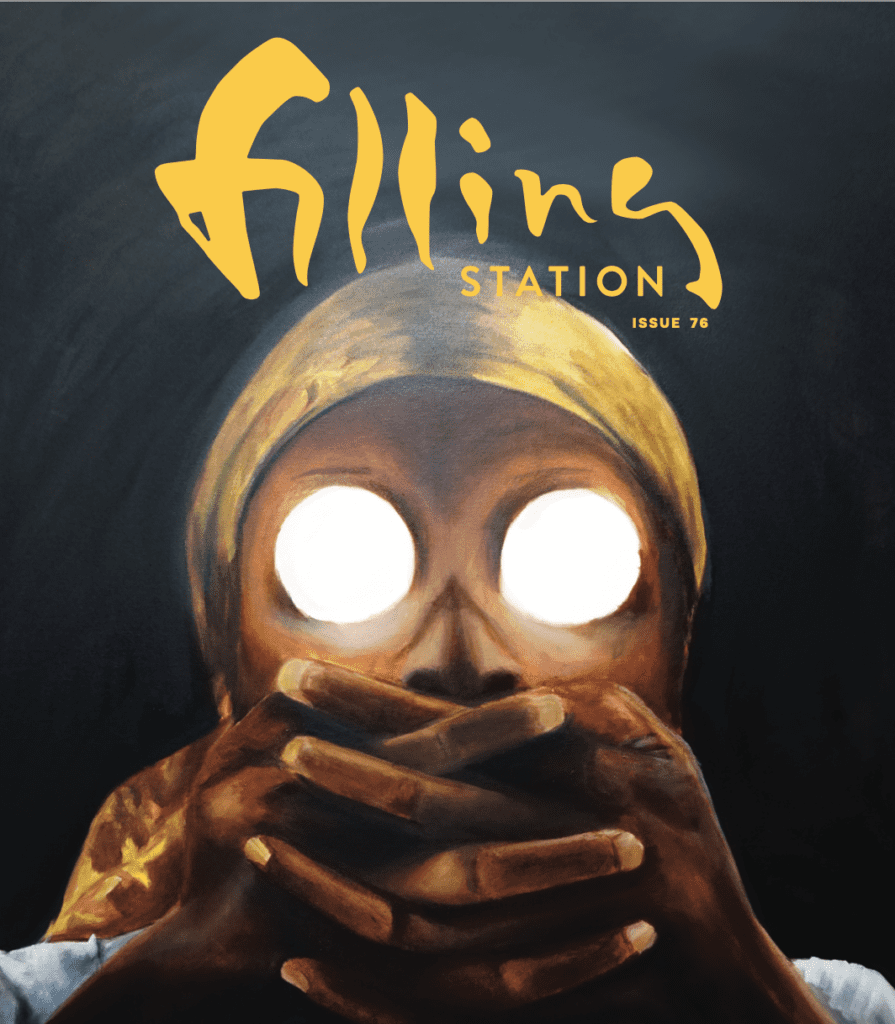 By its nature, experimental literature is a genre that’s constantly evolving. Being at the forefront of those changes is the goal of filling Station, and it’s what makes managing editor Amy LeBlanc excited about publishing the magazine.

“I don’t think we’re ever going to see the day where we’ve seen everything that we can in experimental literature,” she says. “People are creative and innovative and they’re just coming up with new work all the time.”

With three issues a year, filling Station is a home for the unusual and speculative. It publishes poetry, fiction, art and non-fiction – but pieces often blur the boundaries between those categories.

For example, Body Haunting by Emma Pickering is a series of poems that doubles as visual art: it starts normally, but the text gradually fades off the page until it’s nearly indecipherable. It’s a piece LeBlanc says is “really strange, but perfect for us.”

Since 1993, filling Station has continually evolved to stay at the forefront of changes in experimental Canadian literature. Its 76th issue launched in June 2021, and it is specifically dedicated to and filled with work from BIPOC artists and creators – an editorial focus that wouldn’t have been part of the magazine in 1993, says LeBlanc.

“It’s important because historically, experimental literature hasn’t been the most inviting space,” she says. “That’s not to say that BIPOC creators haven’t been working in these genres, because they have been and they’ve been doing absolutely brilliant work. It just hasn’t necessarily been featured on the same platform as a lot of experimental literature by white creators and writers.”

filling Station’s 76th issue is also different because they worked with a guest editor, Canisia Lubrin, to put it together. The collaboration made for a much stronger collection of work, says LeBlanc.

“I didn’t want to be the one making the final decisions [about the issue],” she says. “Being a white woman, that didn’t feel right and that didn’t feel necessarily like the most generative approach to magazine publishing.”

Many other literary magazines are also focusing on carving out a space for BIPOC voices, stresses LeBlanc; filling Station is not the only one making this effort.

She hopes the issue will bring filling Station forward as a space for BIPOC creators, so that in later years there won’t be a need for a dedicated issue.

“We want to have a strong BIPOC presence in every issue,” says LeBlanc. “That’s ultimately the goal.”

One of the first magazines that I really fell in love with was Contemporary Verse 2. They are a really incredible Canadian poetry magazine. I got a subscription to them in about grade 10. Wanting to be a poet myself, I was just so excited to discover that there was a place for Canadian poets to be publishing because I really didn’t know anything about lit mags. I didn’t even know that there were other ones, I thought it was just CV2. And then I learned how many others there are, but I have been a subscriber to CV2 for so many years now and the poetry that they’re putting out is just absolutely phenomenal. Everything they do, I feel like they’re tapping into some of the absolute best in Canadian poetry.

I really love the compiling process where you have all of these disparate parts that are individually amazing – pieces, cover art, everything – and then you find an order for it and a perfect way that it all fits together so it tells a bigger story than each individual piece says on its own. I find that so fun and it’s really cool to come out the other side of that and have an issue that you can really visualize, where before you just had individual pieces and now you actually have a collective work that everybody has contributed to.

Joshua Whitehead. He just recently edited an anthology of Indigiqueer speculative fiction for Arsenal Pulp Press called Love After The End that’s absolutely brilliant. From an editorial standpoint, I really, really admire the work that Joshua did on that book. I also just admire him as a person and I admire his writing as well, but that particular anthology is absolutely amazing.

I’m really looking forward to reading a whole bunch of general submissions because we have a backlogue and I know there’s so much incredible work just sitting there waiting to be read.

I’m also excited to figure out a theme for our next themed issue. I have some ideas in mind of what I might like to do, but I’m excited to hear what our volunteers think. A lot of the time I have an idea of where I want to go and then one of our volunteers says something really brilliant and we go in a totally different direction and it’s way better. I’m excited for that collaborative process.