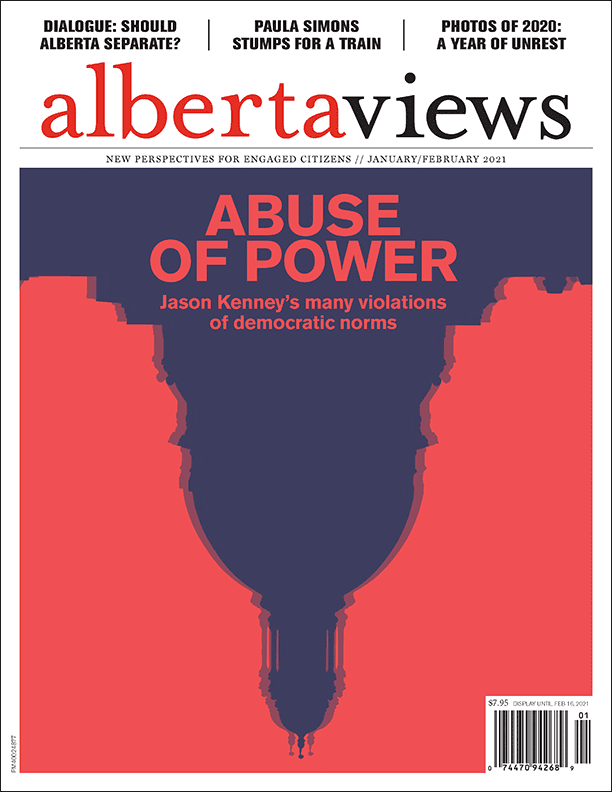 When Jackie Flanagan gets letters from readers saying, “I’m so glad I discovered your magazine because now I know I’m not alone,” she knows exactly how they feel.

Flanagan felt the same way before she founded Alberta Views in 1997. At the time, she was concerned with a cultural shift happening in Alberta, including cutbacks to education and healthcare, and a lack of media coverage of these issues that wasn’t conservative.

“It seemed that there was no outlet for progressive ideas, and so I started a magazine,” says Flanagan. “The idea was that it would be a source of analysis and commentary and ideas that were critiquing the zeitgeist of [former Premier Ralph] Klein and the conservative government of that time.”

The first issue of Alberta Views was sent to 50,000 households in a direct mail campaign. Flanagan says the effort had a three per cent subscription rate, and that many of those 1,500 people have remained subscribers over the past 24 years.

“I felt that the magazine served as a kind of magnet for people who had felt alone or isolated and realized that there are many others that have these ideas,” she says.

Today, the magazine serves the same purpose: addressing political and social issues for engaged Alberta citizens. Especially through the pandemic, Flanagan says that “the need for perspective on government policy is ongoing.”

But like other magazines, COVID-19 has changed business. Advertising revenue, which for Alberta Views comes from theatre companies, symphonies, dance companies, operas and festivals, has “practically disappeared,” says Flanagan.

Forgoing that source of revenue, Alberta Views has relied on its funding partner, Marmag, a company that has covered the losses of the magazine since the early 2000s.

In the past year, that pool of investments has been crucial: “If we hadn’t had that backup, we would’ve gone out of business,” says Flanagan.

Thanks to that funding model, the magazine has continued to print, and subscriptions have gone up. Flanagan attributes the increase to people having more time to read as they’re stuck at home.

And though the staff behind the magazine worked from home for six months, they have been back in their offices since September, though Flanagan says it’s amid “an abundance of caution” with respect to social distancing and COVID protocols.

They’re looking forward to the end of the pandemic to move forward with Alberta Views.

“Until this is over, just surviving and being able to put out a new issue every month is an accomplishment,” says Flanagan.

Chatelaine. When I was a kid, we actually subscribed to quite a few magazines. Chatelaine was edited by Doris Anderson at that time and she was from Medicine Hat, where my dad was from. She was a feminist and the articles in Chatelaine at that time, about possibilities for women, were really important. I really found it an important influence in my life.

Always being alert for what’s going on. I learn so much about my province and politics by doing this magazine. I’m constantly learning. It’s been great.

I think most magazines in Alberta are given away free. That’s unfortunate. The people paying for those publications are the advertisers and that’s really influencing the content of the magazine to be speaking to people entirely as consumers. I don’t know if that’s really a positive thing. I understand it, though, it’s very expensive to gain and keep a subscriber, and it’s heartbreaking when people don’t renew.

Lewis Lapham, the previous editor of Harper’s Magazine and current publisher of Lapham’s Quarterly. I really admired his intelligence and thoughtfulness. Robert Fulford, the editor of Saturday Night. I’m dating myself because this is a long time ago but these were the magazines that were important to me.

The end of COVID and the return of performances, when people are able to be with each other again – plays and concerts, dance performances and operas. And that will, of course, make a difference to the magazine and the kind of things that it’s able to cover.