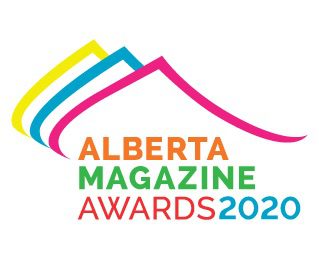 The Alberta Magazine Publishers Association (AMPA) is proud to announce the winners of the 2019-20 Alberta Magazine Awards. Industry members gathered to celebrate the best and the brightest of industry talent during the Association’s first-ever virtual awards gala broadcast on June 25, 2020.

The annual event, judged by industry leaders from across North America, showcases the outstanding work of magazine professionals in the province. The awards gala also marks the 25th anniversary of the Alberta Magazine Publishers Association.

“The finalists and winners showcase some of the finest content in Alberta magazines and highlights our world-class magazine sector,” said Trudel, noting the Alberta Magazine Awards program honours and celebrates the work of Alberta’s magazine creators, art directors, writers, photographers, editors and illustrators. “These individuals bring passion and insight to our unique Alberta culture and ensure Alberta voices and stories are heard.”

Awards were presented for excellence in magazine content published in 2019 in 18 Showcase categories and five Achievement award categories.

Avenue Calgary was named Magazine of the Year. The jury said the magazine “addressed complex and timely topics to share deep insight with Calgarians and what’s important to them.” Avenue Calgary’s creative and innovate strategies to engage readers beyond the pages of its magazines through programs like the Made in Alberta Awards and the Best Neighbourhood issue carried the magazine to the top spot.

Calgary’s Child founding publisher M.L. Ellen Percival was named the Achievement in Publishing recipient for her long-time contributions to the industry. The jury said Percival has successfully built a community of readers, subject matter experts, writers and service providers, that together – with the magazine at the centre – provide an invaluable service for people at all stages of parenting.

Lisa Kozleski received the Editor of the Year award for her editorial leadership at the Lethbridge College alumni magazine Wider Horizons. The jury said Kozleski, “consistently reaches into difficult and fascinating terrain as an editor and delivers stories that entertain, engage and educate its readers.”

For the first time ever, the Magazine of the Year category was expanded to include B.C., Saskatchewan and Manitoba, with Vancouver Magazine, BlackFlash and Canada’s History winning top honours in their respective provinces.

A wide range of magazines from across the Alberta earned podium spots for their work in editorial and design showcase categories.