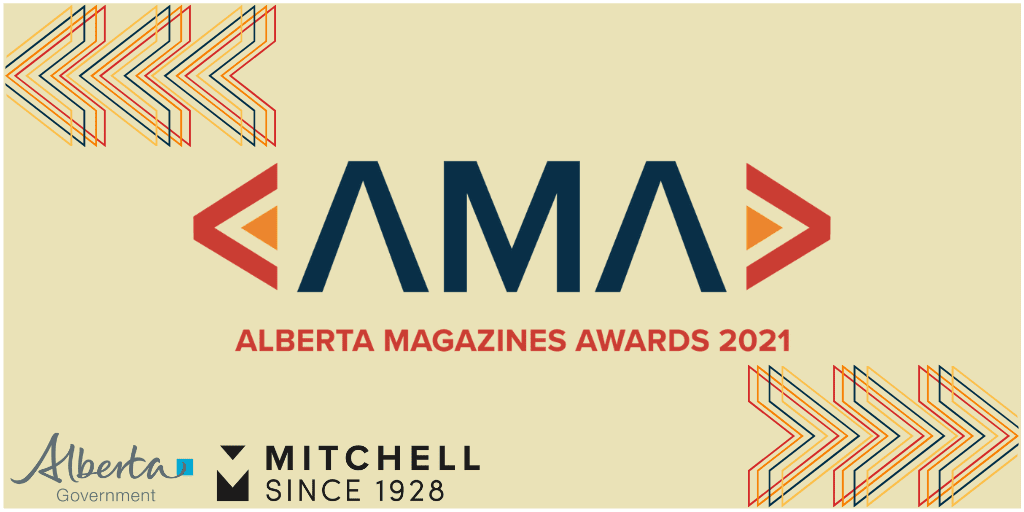 The best and brightest talents in the Alberta and western provinces magazine industry gathered online on June 3 to honour the winners of the Alberta Magazines Awards hosted by Alberta journalist, author and magazine lover Omar Mouallem.

The annual event, produced by the Alberta Magazine Publishers Association (AMPA) and judged by industry leaders from across North America, showcases the outstanding work of magazine professionals in the province.

“These finalists and winners represent the best of more than 200 nominees, whose work started at excellent and rose from there.” The Alberta Magazine Awards program honours and celebrates the work of Alberta’s magazine creators: art directors, writers, photographers, editors and illustrators. Collectively these individuals bring “passion and insight to our unique Alberta culture and ensure Alberta voices and stories are heard,” said Trudel.

Awards were presented for excellence in magazine content published in 2020 in 22 Showcase categories and five Achievement award categories, including the out-of-province awards for Best Story from British Columbia, Saskatchewan and Manitoba.

Edify was named Alberta Magazine of the Year. Judges said the magazine “has built on the success of its long-standing brand Avenue Edmonton to create a familiar yet surprising magazine.” Its commitment to editorial excellence and ability to engage readers carried the magazine to the winning spot.

In recognition of Brian French’s impressive career, he was the Achievement in Publishing recipient for his work on the WHERE Calgary brand and his hard work on the leadership team at St. Joseph’s Communications. Brian French’s expertise in media sales and marketing has made him a key figure in Canadian magazines over the past two decades.

Evan Osenton received the Editor of the Year award for his continued work at Alberta Views. Since taking on the editorship of Alberta Views in 2012, Evan Osenton has helped the magazine stay its course and established it as an important resource and dialogue-creator for its informed and loyal readership.

Rob Tanner, president and group publisher at Tanner Young, was recognized as Volunteer of the Year, in recognition of his outstanding contributions advocating for Alberta magazines spanning his nearly 30-year publishing career. Rob’s volunteer efforts exemplify what it means to give back. He takes a wholistic view of the publishing industry, advocating on behalf of both AMPA members and the wider sector.

Alberta Best New Magazine was awarded to The Polyglot, a multi-lingual poetry magazine that is connecting multilingual communities across Alberta and the world. The judges said that The Polyglot has proven itself–with a multilingual mandate that’s not only unique and essential to the literary scene in Alberta, but also in Canada–to be a magazine that’s a heavy hitter on an international scale. And the magazine does hit hard with every poem and work of art, but still shows care for each of the few dozen languages they’ve published.

The recipient of British Columbia Magazine of the Year was The Tyee, an independent, online news magazine from B.C. founded in 2003. The judges took note that the magazine increased reader financial contributions by 58 per cent in 2020, demonstrating a loyal readership that values fact-driven stories and reporting that enlivens the democratic conversation. They’re an indispensable guide to life in BC today and into the future.

Saskatchewan Magazine of the Year went to Briarpatch, a magazine of politics and culture that prides itself on being fiercely independent and proudly polemical. The judges said that Briarpatch has sustained its sharp editorial edge. The magazine has known and understood its audience for decades, and has really come into its own with timely, important stories that are consistently well-told and well packaged.

Manitoba Magazine of the Year was Prairie Manufacturer, the magazine for Western Canadian manufacturing leaders. This magazine presents timely and well-assembled material in an engaging and crisply designed package. A nice layout and design that’s easy-to-follow leads readers into editorial that serves its audience well.

A wide range of magazines from across Alberta and the western provinces earned podium spots for their work in multiple editorial and design categories.

See the full list of Showcase Awards finalists and winners and Achievement recipients by viewing the Winners and Finalists document. Read their award-winning entries online at albertamagazines.com.