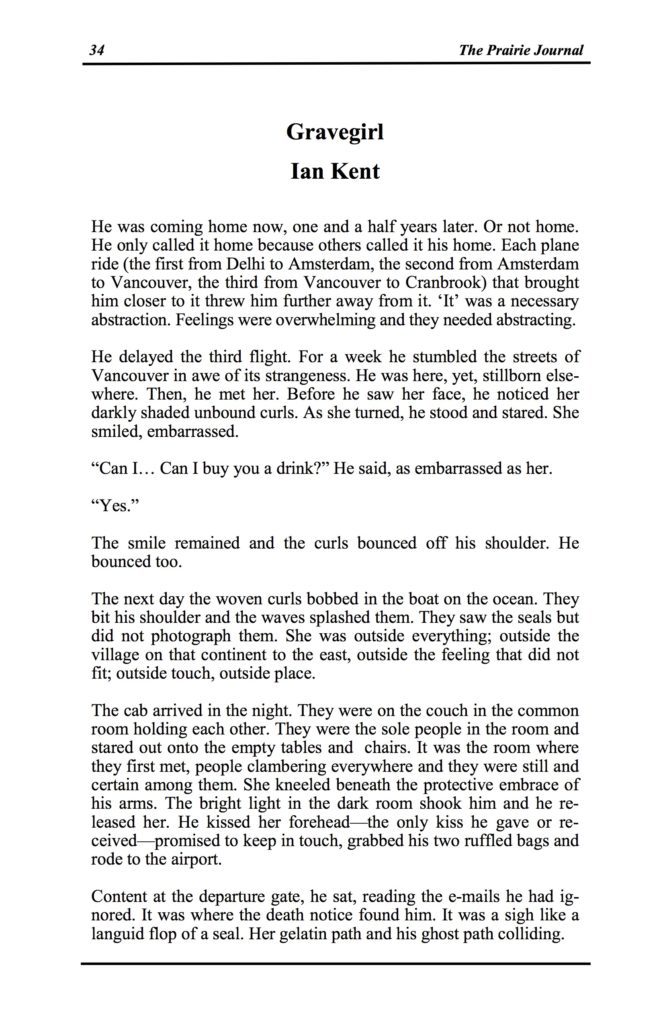 In the morning, he saw her for breakfast. What words came were inadequate. Bodies sufficed.

Ian Kent, author of “Gravegirl,” a short story we published in issue # 72, attended the University of Alberta where he attained his Bachelor of Arts (major in Drama; minor in English). After his graduation, Ian wrote and produced two children’s plays, “The Kingship of NNNNorp!” and “Witches’ Brew Carrot Stew”, at the Edmonton International Fringe Festival. Then, he traveled overseas where he worked in India teaching and directing Tibetan artists in exile Shakespearean acting techniques, while also editing and contributing to Contact Magazine. Most recently, he wrote, produced and directed the play “Abattoir Morning” through his production company or; theatre (ortheatre.com). His poems have been published in Quills Canadian Poetry Magazine, The Prairie Journal, Scrivener Creative Review, Rhubarb and Contemporary Verse 2. His fiction has also appeared in Montreal Writes. His non-fiction has appeared in Rhubarb. Now you can read his story here!

We published  “Belovèd by the Moon”, by Katherine Koller, in issue #70. Her short story collection, Winning Chances, was published in Spring 2019, by Great Plains Publications. She is C.A.A. Writer-in-Residence for 2018-2019.

Read  “A Small Malignancy” by Shelley Wood at www.prairiejournal.org. She also has stories in the Antigonish Review, the New Quarterly, and Room. Shelley has won many awards, among them the Fall 2015 “Tethered by Letters” contest, the 2016 “Frank McCourt prize for Creative Nonfiction”, and the 2017 Fiction prize from FreeFall Magazine. Her first novel, The Quintland Sisters (William Morrow|HarperCollins), is a Canadian bestseller!

To Celebrate Alberta Cultural Days, The Prairie Journal: A Magazine of Canadian Literature publishes an annual Alberta Muse issue, inspired by Read Alberta Magazines Month. Stroll through our covers and check out our guidelines at www.prairiejournal.org. The Prairie Journal is a founding member of AMPA and of Magazines Canada, since 1984.