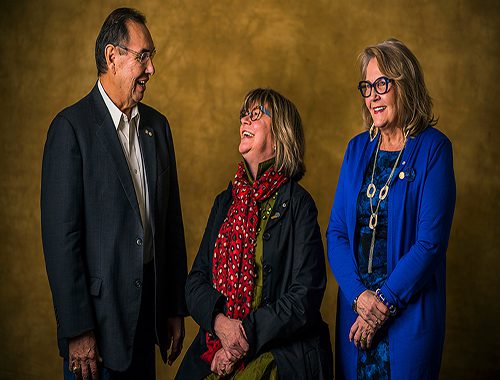 A Call to Bear Witness

Nearly two years after the Truth and Reconciliation Commission’s final report, two of the TRC commissioners talk about what has happened since and how Canadians can move forward.

Treaty 6 Grand Chief Wilton Littlechild, ’67 BPE, ’75 MA, ’76 LLB, ’07 LLD (Honorary), is from the Cree community of Maskwacis and spent 14 years in residential schools. He is the first First Nations person elected to Parliament. Marie Wilson, who will receive an honorary degree from the University of Alberta in June, is a journalist, teacher and senior executive manager. Wilson and Littlechild, along with Murray Sinclair, were commissioners of the TRC. This excerpt is from A Conversation About Reconciliation, part of the Edmonton Public Library’s Forward Thinking Speaker Series (epl.ca). The event was moderated by Shelagh Rogers, CBC journalist and honorary witness to the TRC.